This interview is from Endangered Characters of Australia. 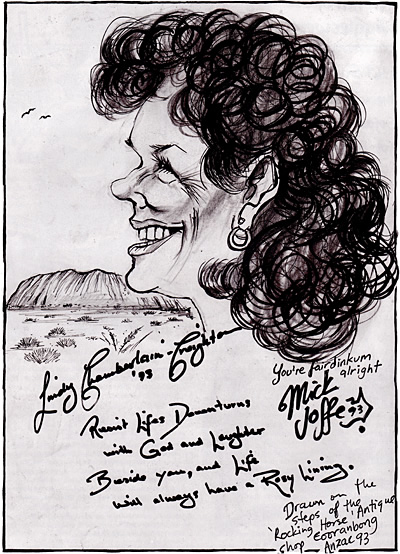 Caricature of Lindy Chamberlain, by Mick Joffe (click to enlarge)

I was born fourth of March 1948 in Whakatane, New Zealand. Mum was from New Zealand; Dad was from the pioneering Murchison family in Victoria. Dad’s nickname was “Mountain”. His name was Cliff. We’d say, “I’m Cliff, drop over some time.” I’ve travelled widely throughout the Outback. Growing up, I lived in every state except Western Australia. We averaged a shift every 12 months. I can remember when I visited Ayers Rock the first time: It was after a 10 year drought. We were pulling a trailer with a Nissan. Everyone else was complaining ‘cause of sore bums on seats but to us it was just so dusty. We did a tyre and then did another on a road to Mt. Connor. Then, there were 2 tracks. We were told to get to Angas Downs and ask which way. “Yeah, no problems,” said the locals. “Same distance, just take your pick.” So off we headed.

We were okay the first 50 miles, then it got more and more deserted ... hardly any vegetation. Dad and the collie slept on a mattress in the trailer. I had the front seat; Mum had the back. I opened the window and poked my feet out. I woke up and there were dozens of camel pats outside the window and they’d slobbered on my feet and on the windows. I’d have died if I’d woken up with a camel lickin’ my feet. The road stopped in a series of sandhills. We had a slow-leaking puncture and we’d already used our spare. Dad said, “I reckon the road’s over there,” and made a run up a sandhill. This was in an ordinary car, mind you, not a four wheel drive. We got up and it was a hundred foot sandhill and we rolled back down onto the road. Nobody could have been on it for years.

We caught 2 lizards, Biggles and Archie, and took them with us for ages. When we got to the other end of the road it had a sign warning, “Do not travel this road. 80 miles of shifting sand. No water or habitation.” That was in 1964. We sat on top of Ayers Rock and counted the clumps of bush. One day it was Sabbath and we didn’t want to drive, so we threw doonas over bushes and made bean bags and lay around reading all afternoon. We signed the first or second book that was ever on top of the rock. It went back years. I think they put a new one in every 2 days in the height of the tourist season now.

One camping trip we were sitting in the bed of the Burdekin River in northern Queensland. It started raining nearby and within 5 minutes our camp was 18 inches deep in running water. You learn not to do these things. At another place, Stathgorden Station, Australia’s second biggest spread in Cape York, we went croc catching and caught this croc, 3 foot 6 inches, and I held it while Michael sat in the boat with his legs crossed all the way back. We tied it up overnight, photographed it then let it go. If they’re hungry, the crocs will go up the river bank and inland a quarter of a mile looking for food and they run about 30 miles per hour. One time this wild boar came for us. A mate told us to climb a tree. I thought he was joking and here was me standing there with a fishing rod. I was gonna jam it up its nose.

When we went to the Rock, we’d been camping for years. I can make a fire without matches and find water in arid country and live off the native plants if I have to. When you have those skills it’s all right going Outback. You still hear of people going off on the Birdsville Track without spare petrol and tyres and water simply ‘cause they don’t know. They’re from towns and used to going to a store for things when in a pinch. There’s nothing wrong with four wheel driving or camping if you use your common sense. But accidents will happen and you’ve got to be prepared.

I’d like to see first aid kits and fire extinguishers compulsory in vehicles, and first aid skills courses compulsory too. We can save a lot of lives if we have a basis to fall back on instead of panic. A lot of it is just common sense but it has to be explained.

Azaria means “Blessed of God” in Hebrew. Do you know the authorities still won’t let me put up a marker in the area of Ayers Rock or even add her name to the list on an existing plaque. Eventually they will.

Resist life’s downturns with God and laughter beside you and life will always have a rosy lining.

On the night of 17th August 1980, Lindy's 9 week old baby Azaria disappeared from the tent in which her family was camping at Ayers Rock in Central Australia. Lindy claimed to have seen a dingo leaving the tent with a bundle in its mouth which she believed to be her baby. A week later bloodstained baby clothes were found nearby, but no body. The original inquest in December at which the families present at Ayers Rock gave evidence, concluded that a dingo had taken and probably killed Azaria, but 2 years later Lindy and her husband were charged with the murder of Azaria. Lindy was found guilty and was sentenced to life imprisonment. She gave birth to a second daughter ~ Kahlia, in Darwin Gaol. In February 1986 a baby’s matinee jacket was found at Avers Rock, substantiating part of the Chamberlain's story, and Lindy was released, the balance of her sentence remitted. Lindy and Michael have received financial compensation but are still seeking legal redress from the Northern Territory Government in this case that divided Australia, a ‘murder’ case which admitted no body, no weapon, no eyewitnesses and no motive. The Prosecution's case hinged on forensic evidence which was later discredited. It is a fact that the Press for years blasted Lindy and Michael Chamberlain with an amount of sensational publicity unprecedented in Australia.

I had met Lindy a couple of times when she came shopping to Northgate, Hornsby. I had a caricature shop there under the escalators for 14 years. She would watch me sketching. I have always been impressed by her self esteem and her sense of humour ~ very different from how she is portrayed by the media. She is a warm, jovial person who really likes herself and enjoys a joke. Lindy recommended her book, “Through My Eyes” and, on going over to the bookshop for it, she found it was in the fiction section. She was understandably upset and the manageress moved her books to the Australiana section. Australia has eventually found her innocent. Wouldn’t it be about time to acknowledge it by allowing a headstone or a memorial to Azaria?