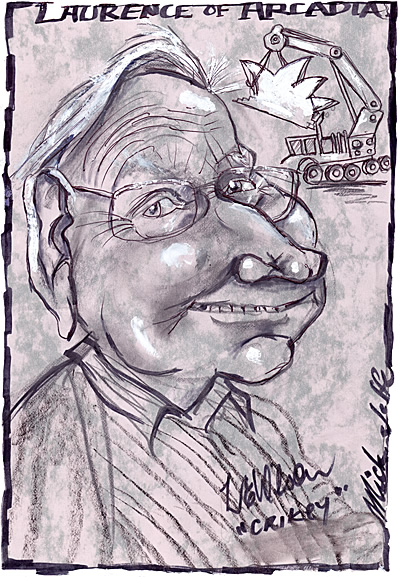 Caricature of Laurie Wilson, by Mick Joffe (click to enlarge)

My ancestors were chosen by some of the best judges in England to come to Australia. In other words I’m a First Fleeter. My relative was James Wright, he was a highwayman. Thank God he came. He was sentenced to death for robbery in 1783, but his sentence was commuted to transportation. He is buried at the old cemetery at Parramatta. I know exactly where he is (laughter). I used to fabricate steel providing most of the steel for Westfield Blacktown about 40 years ago. Had to hire cranes into erect it. The men from Mars were big in cranes, biggest of their time, 1940’s. It was Gordon Marr Snr he was a typical “craney” down-t-earth hard-working. In those days you had to be a hands on man and that what he was. He didn’t stand any nonsense from the unions, his son Gordon Marr Jnr has resurrected the men from Marrs doing similar work, At the Granville rail disaster I had a police escort with my 3 cranes down to the site and they worked there all day and all thru the night,. As they jack-hammered the road into sections one of my cranes lifted the bodies, one at a time onto a canvas platform where they were covered and taken to several mortuaries for identification. We lifted approx 80 bodies on thet fatal day. I was under the direction of the police. The largest crane I had then was 22 ton capacity lift, only the men from mars had a bigger one but that was in Wollongong. They got that one in later in the evening to lift the concrete road sections and placed them on big semi trailers and taken to Clyde railway yards with the crushed carriage. I saw a lot that day and it disturbed me for quite a few weeks even now when they have an anniversary each year, it all comes back to me.

Whelan the Wrecker was in demolition but he had one or two big cranes that swung huge steel balls like in the comics. I’ve seen him at work in the city, he was the expert, another down-to-earth character died tragically too young. A lot of these original guys are gone. I had mobile hydraulic cranes in the late 1960’s In 1978 I brought in 2 x 130 ton Demag cranes, then in 1997 2 x 200 ton Demags, then a 300 ton Demag crawler crane, one of only 2 in the world then. This crane we worked on the Sydney Olympic stadium,. I was the first one in Australia to import a heavy all terrain truck crane in excess of 100 ton capacity. I was the first on to get all of these big cranes into Australia and registered and onto the roads. The cranes e had to meet weight restrictions. I supplied all the cranes to build Westmead Hospital we replaced the old cranes on top of the Harbour Bridge with new ones about 1994, we built railway bridges all over the metropolitan area, we supplied the cranes for the building of the M2 N motorway and lifted all the M2 bridges. We used to lift the tower cranes to 2nd or 3rd floor as the city skyscrapers grew and they jacked themselves up to the next floor. This is how we built Centrepoint. We lifted a lot of shopping centre covered walkways in the city, King t, and Pitt Street. We did the lifting for the city monorail, lifted Alan Bond’s America’s Cup boat in and out of Sydney Harbour and a hundred other boats. We had the largest fleet of heavy lifting cranes in Sydney. At Garden Island naval dockyard, lifted on and off the warships. When BHP built a new rolling plant at Rooty Hill in the 1980’s they purchased a huge generator from Italy and it broke and then they flew another one out on a big Russian Antanov cargo plane, we unloaded it at Mascot. It was close to the planes capacity and also close to the crane’s capacity. I’d say it could have been over hundred tons.

In Canberra we worked on the Mt Stromlow satellite dishes, we worked 2 big cranes thereï¿½ heaps of jobs over a period of 30 odd years. Oh I almost forgot we worked on the construction of the opera house. They imported their own big cranes from Germany, we lifted a lot of ground level stuff before the sails went up. In 20 years you won’t get these stories from us. That would apply to Ken Coles (the large traction engine in Boundary Rd ï¿½ known as the ï¿½father of the backhoeï¿½) and Jarrett of Arcadia, (pioneer of farming machinery) They were pioneers of what we call ï¿½modern day machinery.’ They’d get army surplus stuff like blitz wagons and convert it for their own use. Those days you couldn’t just buy a product for the job. My first crane was a 6 ton cap crane built near Rookwood, in the early 1950s by Con Popov, a Hungarian he was probably the guy who invented the hydraulic crane, I did meet him and he was only about 10 years older than me. When I sold to Brambles in 1998 I had another business called Skymaster Plant Hire,,ï¿½ a big fleet of access equipment, scissor platforms, booms with baskets like self-propelled cherry pickers, telescopic handlers with excavation bucket and forklift tines. Had about a hundred and sixty pieces. In March 2006 I sold to a company in Perth, United Equipment Pty Ltd owned 60% by AMP. I stayed on for 6 months until I retired at age 76 . If I hadn’t been bought out I would still be there (laughter.) It’s hard to stop working but five acres keeps you busy. I’ve been married to Maureen for 29 years. If you find a good woman, don’t waste time, propose to her! Marry her if she’s that good or someone else will. That’s what I reckon. That’s what I did and she’s beautiful. She’s bright all the time. She gets up bright, full of life and happiness. We had a honeymoon on the QE2 when she called in to Sydney on her maiden world tour in 1981 and we travelled on her again 1991 Sydney to UK. In 2006 Queen Mary 2 made her debut in Sydney on her maiden world cruise and we travelled to UK on her. In 2007 we flew to New York and came back on he new Queen Victoria on her maiden world cruise. We love ship travel. When we got on Queen Vicytoria it was the first time all 3 Queens were together. QE2, Q Vic and Queen Mary. At 6pm, all three cruised down the Hudson river, past the statue of Liberty where there was a huge fireworks display and they went there own ways around the world. It was a sight! (laughter) A great emotional moment if you’re fond of Cunard ships, the kargest cruise liners n the world. We’d usually have state rooms with their own verandah, you travel well, drink well and eat well.

I was born in th depression, the family home was a bag tent, walls of whitewashed lime and a tin roof. I’ve always had the wrk etic. We were poor. I never had a start. No one gave me anything. You’ve gotta work hard, have ambition, be positive, be honest in business. That’s about it.

I read Bob burgess who you Joffed. I was amazed. He’s on my doorstep in Cobah Rd we’ve lived in Cobah Rd for twenty eight years, kept a low profile, but in business, pretty high profile, high pressure, high stress, but I learnt to deal with stress. Don’t let anything get over you, just move on, strength of mind and power of positive thinking. If you’re not a positive thinker, you write yourself off. There’s three kinds of people in the world, people who make things happen, people who watch things happen, and people who say what happened,. Some people in the district refer to me as Laurence of Arcadia, I’m happy with that. Worry is interest borrowed on trouble. Its one Ive believed in most of my life. You won’t pick any words of wisdom up from the current generation; they didn’t come through the university of hard knocks. They’ve grown up in a sheltered atmosphere and they wouldn’t know how to take the risks. That I took on no education and no money. You can achieve whatever the mind can conceive. How’s that for positive thinking at 80 I do 8 hours in the garden I don’t have a nap and I’m strong too (laughter) This is some memorial to be Joffed, I’ll put on my headstone “See Mick Joffe.”