This interview is from Endangered Characters of Australia 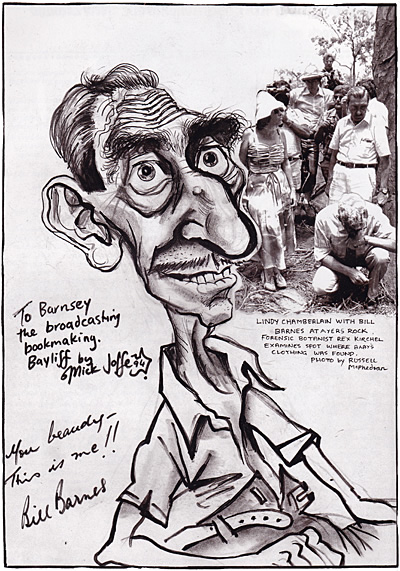 Caricature of Bill Barnes, by Mick Joffe (click to enlarge)

My great grandfather, William Austin Barnes, built the first stone house in Adelaide in the late 1830s, corner of Morphet and Grote Streets. He was a surveyor on one of the Sturt expeditions. He established sawmills at Port Elliott and helped establish Tolleys Wines.

I left school at 14 in the Depression. As soon as you could get work you went to work. I joined the airforce in the war; New Guinea, Bouganville, New Britain... 'pushing back the yellow horde' it was called. Came back and all my 3 brothers were journalists and radio announcers. Commercial radio was just getting under way and I went into radio in 1946, 3SR Shepparton on the Argus Network. Radio in those days, you did everything - wrote scripts, picked your music. I liked interviewing and through radio met all the greats of the land. Dame Sibyl Thorndyke and Sir Lewis Casson were very memorable; Winifred Atwell too.

Early in radio on 7H0 in Hobart they decided to be innovative and have the chimes of Hobart Town Hall on the hour. Archie Park the Lord Mayor decided to open it. He said, "Stand by; we'll cross to the chimes at 6 pm", and a voice screamed out, "Let me out!" The chief engineer, John Dodds had been locked in all night with the clanging.

I retired from full-time radio and joined the Department of Law as court recorder and court orderly in the late '70s. There was a great affinity with the [Chamberlains](Lindy_Chamberlain) as I'd just lost my wife and they'd just lost their baby. I was charged with looking after the exhibits and the welfare of the Chamberlains. My first impression, when it was thought by many it was foul play, my first and lasting instinct was that they were grieving.

The finding of the first inquest was 'dingo' and that's where it should have finished but of course they brought in forensic and the second inquest squashed the first finding and committed her for trial for murder.

I knew that here was a mother that had lost a child and my feeling has never diminished. In fact corroborated by the Aborigines of Ayers Rock themselves who will tell you a dingo took that baby.

She never even lost her personal strength and her faith in her religion and that's what pulled her through.

It was forensic that bedazzled the jury and put her in gaol. A lot of it was since found wrong; blood later turned out to be paint and that sort of thing. Even hardened journos, and there were at least 30 of them, were aghast when the verdict came in.

See, at the first inquest, all the Wests, the Lowes and other campers on the spot with the Chamberlains - they all gave the correct facts and the finding was, logically, the dingo took the baby and she certainly could not have done it.

See, people are swayed by the Press and the media and by people in court, and by that which is written to get their attention. People don't know all the facts and haven't sat in court all that time.

Frank Gibson their bodyguard left the police force after the inquest and later took a security job at the Sheraton in Alice and whilst there Meryl Streep came there to play Lindy. The irony was Frank ended up being in charge of security for her and her husband at the Sheraton. He's died of a massive heart attack.

If the Crown or anyone wanted an exhibit I was proud that I could put my hand on any one of 'em. I ended up with a couple of hundred. The Crown Prosecutor Ashley Macknay smirked as I was having trouble finding an exhibit. I asked for the exhibit book and found that those particular exhibits had been signed out to Crown Prosecution, signed by Ashley Macknay who was asking for them. The court broke up laughing.

Lindy was a walker, a bush hiker, a down-to-earth woman with a terrific sense of humour but of course I met her in a time of grief. Before we went back to the Rock I said, "Look, sweetie, how do you feel about going back to the Rock?" and she said, "Well, if one of my boys was run down in front of my house, would I not walk down that street again?"

Mike and Lindy accepted within hours that Azaria was dead - by the blood and the freezing cold, etc - and were advised by everyone to leave. She kept everything within herself. She always had command of herself and would not let anyone in. The same in gaol.

We had a makeshift court at the Rock for the first inquest, just a couple of tables and a few chairs for the witnesses. The local pastor had been given permission to record the proceedings in the body of the court and when court resumed after lunch he pressed radio instead of record and out came some red hot jazz screaming through the court and broke everybody up. The local pastor was very embarrassed.

Everyone can have their opinion but when an opinion is formed from headlines. I think truth is one of the important things in life and for people to be listened to and understood; not just Lindy. Compassion, I would say, is the word that encompasses. Have compassion for your fellow man. Many people don't, you know. They say, "F..k you Jack." Think a bit. We've all done stupid things. Show compassion. Oow! when I find who's pinched my Derek Roff book I'll show none! Oh, it's all right; I've found it.