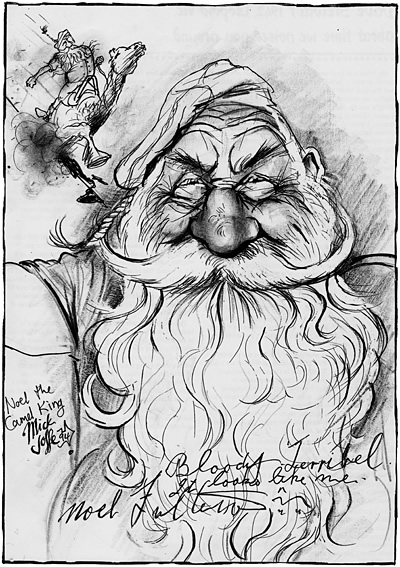 Caricature of Noel Fullerton, by Mick Joffe (click to enlarge)

I grew up in the Northen Riverina at Temora. The family were fruit carters… ‘bucket men’ they was called ‘cause we sold fruit in buckets. 3 in each and hand and door to door. We supplied all the big contractors of the Snowy Mountains Scheme with fruit and vegetables. I was an orange man. I used to get rid of 13,000 cases of valencias and 16,000 cases of navels on me run — Bombala, Bega, South Coast.

I came up here (Northern Territory) so I wouldn’t have to pay me road tax; drove road trains for years. The old grey ghost used to have 69 wheels on the ground and 195 feet long. One of my sons married an Afghan, Sallay Mahomet’s daughter, Desray. Our next door neighbour was old Roy Morgan who looked after a few hundred camels for Elders. Gool Mahomet used to live with us. Gool’s father came out in 1872 to work with camels. Gool carried on with camels till 1930’s. Another ol’ mate of ours was Arthur Liddle, Arthur’s father, Bill Liddle opened up Tempe Downs, Angus Downs and Kings Canyon. Took the first sheep to mineral Fields. Walked from here to Western Australian coast in the early 20’s and back twice with camels and never got a mention in the history books. See, they all talked camels and what their father did with them. The last police with camels went out in 1952 in the Northern Territory and 1947 in South Australia. The last wild people out in the desert was in 1966. The last man to make charcoal in the Northern Territory was in 1939. If they had trouble with a blackfella they shot him and burnt him up. That particular man was burnt in a drum.

In our district we had a few camel men who never had much recognition, the early days. In 1926 we only has 28 white men and 8 white women in town (Alice Springs) so you could have been forgotten in the history books quite easily. Bill Liddle had his homestead in the mouth of the King’s Canyon in 1918. MacNamara in 1914 shot 12 Pitjantjatjara ‘cause they took the bell off his milking cow. On his property was buried O’Leary — in 1926 he got a load of “jack” and couldn’t urinate so they ended up cutting a hole in his stomach with a pocket knife and he died of peritonitis. Isolated area, see. With the Coniston massacre 1928/9 the man who killed Brooks was never apprehended. Tommy Kilgariff’s father lent Brooks 3 women. He wouldn’t give ‘em back. Tommy’s mother grabbed Brooks round the arm and Tommy’s father speared Brooks and hit him on the head with a nulla nulla to kill him. When Murray and Morton went out, the man who killed Brooks (Tommy Kilgariff’s father) never got killed. He’d escaped to the bungalow but in retaliation they shot a lot.

They took Walbery people out to kill Walbery people. They had pay-back spearings in the area and decimated a lot of their own numbers for years after. They started off by shooting Bluey Jabaroola, he was 6 years old. A bullet through the hip and out through the knee. His mother and I escaped with him. All the rest were shot and burnt in a heap. There were 20 killed in that massacre not 31 as the records say.

I got Bluey on tape and he reckoned his old man was still kicking when they poured the kero on him. It took 12 months to seep through to Adelaide and they put a telegraph message that an enquiry was coming. So Murray went back and shot all the survivors he could find. When they looked for witnesses, they’d either run like blazes or wouldn’t talk. One old fella I got on tape personally counted 210 bodies. Mort Conway, not long after, went out and found 20 skeletons in Tea Tree thicket and when he asked the local natives how they got there, they said it was a corroboree, surrounded by Murray’s men and every person shot.

We’ve got apartheid in reverse. All Australians should have one law. If Aboriginals have mineral rights under their land without a miner’s permit, we should have mineral rights under ours without a permit. We’ve got legal aid fighting legal aid. This Mabo is going to make billionaires out of millionaires. The money goes to the local people. I say what I please and if anyone can’t believe me, come out and show me where I’m wrong. I talk too much. I could talk 6 hours straight on camels and early Alice Springs.

In Australia we have 1 million new Australasians who are not and I believe after 6 years if these people don’t want to show allegiance to their country and a bit of respect, they should not own one inch of it.

In my family I’ve got Maori blood, Vietnamese, Afghan, Aboriginal, Japanese and 5 other races. My grandkids don’t want to be any of those things. They want to be Australians that’s all!!

Noel Fullerton, as the “Camel King”, is known all over Australia and all over the world. From his camel farm 200km south of Alice Springs he does 1, 2 and 3 week camel safaris and 1 day, ½ day and 1 hour camel rides. Hundreds of people a day from dozens of coaches take 5 minute rides. Noel is photographed and videoed by thousands a year. The other day a tourist told him he’d seen 3 programs on Noel in France in one month. Noel said “I don’t know anything about these things, Noel is depicted riding a camel on the NT lottery tickets and in countless books and tourist material. He is not only the very picture of a Centralian cameleer; he embodies all that knowledge associated with camel history and Central Australian history. He is a very popular fellow and the territory would not be the same without him.