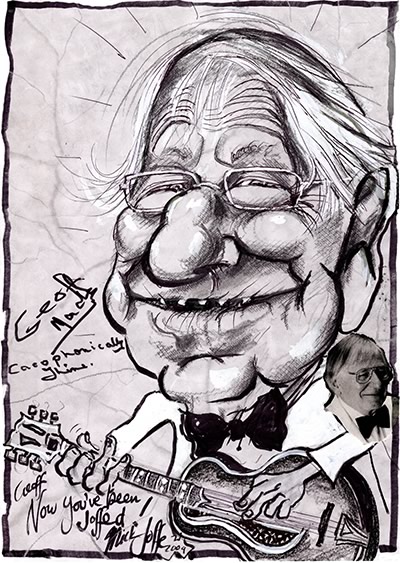 Caricature of Geoff Mack, by Mick Joffe (click to enlarge)

I'm only 87 and you know Mack's only my stage name. It's really McElhinney cause Hinney was a rude name given to the colleens, the Irish girls who got friendly with the Spanish sailors who got washed up on the Northern Ireland west coast 1598 or something. McElhinney means 'Son of a Hinney'. I was in the dance land in Amberly and the comic dragged me on stage to help him in a skit and that's how I got on stage and soon I was singing a lot of Australian songs, "Ballard of Net Keyy", "Wrap me up in my Stock Whips and Blanket", lots of Text Morton stuff. I became a regular entertaining the Yanky Officers. General McCarther of course entertained himself but he was later on a terrific inspiration. He's land in a flying boat and jump in a dingy then splash ashore in from of the cameras! But at least he was there! We thought he was a bloody good soldier being on the job. Leading us! Since then I learnt all his eccentricities, I'm still learning 'em now (laughter). He was so different to General Blamage who pus us down the bastard. I was actually entertaining him later in Tokyo in 1948.. only four officers and some ladies in the room and Blamey didn't event look at me let alone talk to me. He didn't like anybody else getting the attention. Nobody liked or admired him much.

At the end of the war I was full time concert parties all the time and playing in bands, boxing. They called me "Taglefoot" cause I was the clumsiest clot in the squadron.

I got posted to airfield construction squadron... flying shovels they still call us. At Biak and squadron built the airstrip. My main act at that time was lampooning Hitler. A marmite jar of boot polish and Vaseline was my makeup for Hitler (laughter)... and a swastika on my arm like Prince Harry. I'd fart as I'd raise my arm in the Sieg Heil with a guitar round my neck (laughter).

On 11th June 1945 we were wading ashore waist deep in water. There were lots of bullets whizzing around us but they were spent... meaning tumbling and at the end of their range. They'd still hurt like hell. When we started to head to the airstrip shells were flying over our heads to shell the Jap defences of "The Pocket" where they had tunnels. The bulldozers ended up burying 445 of them. When we were young we were brainwashed that Japanese were lower than the low. How you change, now I'm 86 I think a bit more about those graves and their descendants, and at 87 graves are a bit closer to home. I have no hatred in me at all. I think I am more loving now than I ever was.

On 24th August 2945 Gracie Fields came to entertain us. There were 22,000 men on the island and 18,000 came to the show. They'd reserved all the rows in front for the officers who wandered in and you could hear the men muttering profanities about the officers. A comic from WA, Jack Hoskins bounced out and up to the radio compere Rodney Jacobs and said "Gee Rodney, It's easy to see the war is over". Rodney didn't have a clue, he said "What ya mean Jack?". Jack said: "Look at all the officers in the front line!". The roar that blew the roof off. I've never heard such a reaction in all my 60 years in show business. I'm still laughing at it, ha ha ha ha ha. There was so much disrespect for most of our officers. I'd found it all along. We used to say "How are we gonna win this war when we've got idiots telling us what to do?"

Now Bob Merril was most famous for "How much is that doggy in the window" only written for his daughter. Peter Allen wrote "I still call Australia home" as a party piece, he wasn't even going to publish it. Slim Newton wrote "Red back on the toilet seat" but that's the one everyone knows him for. Well I wrote "I've been everywhere man" as a throwaway to sing one off...

Lucky Grills and I and my wife Tabby were working at Hotel Coolangatta for over two years, 1958 and 1959. It was time to go back to Sydney and I'm sitting in the front of my vanguard panel van at Corrumbin near Alex Griffith's Bird Sanctuary and I'm thinking to myself "Now what am I gonna open my act with?", I've been away for three years, I better write an opener... just a throw away... just to get on. I had three road maps in the front and I noticed a lot of the towns rhymed, so in two hours I wrote a chant and I liked the aboriginal sounding names and I called it the swagman rock. That night at the Coolangatta, Lucky Grills held up the words for me and the people enjoyed it immensely, and they wanted it again. If they hadn't I was gonna throw it away, I did that with a lot of my songs.

Festival records said "You're too old to promote so do you mind of we give your songs to young performers?". I was only 40. Lucky Starr had asked me for it from early on. It made his career. It was no. 1 on the top 40 for 16 weeks! This is 1962. It had taken over two years to surface... from Lucky Grills to Lucky Starr to Lucky Song.

When this manager at Festival heard my rendition of it he said "You'll have to change the name from 'The Swagman Rock'". I said "Why?", he said "Rock 'n' roll will be dead within a year", ha ha ha. So I changed it to "I've Been Everywhere" and I'm glad I did. It's worked; why, I don't know. Then Lucky recorded the American Version, the English Version and the New Zealand version... the hardest of the lot.

Today it's alive and well. I live off it. I only live round the corner from your readers and Mt. Kuring Gai. It might have been about a hungry swaggy but I've been dining out on it ever since. Tabby and I were up at our favourite watering hold, The Asquith Bowling club for a good ol' Chinese feed just the other night. At least you're doing something Mick, it's been a great day.